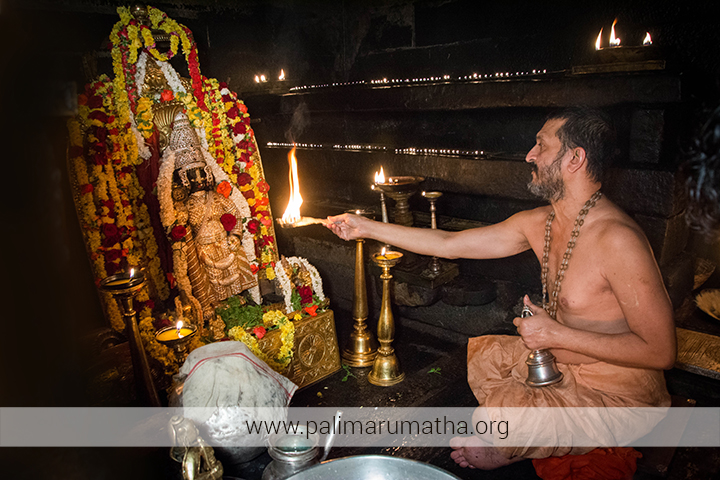 With the blessings of Lord Srinivasa of Tirupati, Shri Hayagreeva Tantri and Kasturiyamma - a couple from Shibarooru village begot a son on 13.05.1956 and named him Shri Ramesha Tantri. From 1961 to 1966, he completed his primary education in a school at Shibaroor. Later he completed his secondary education at Kadandale.

Being drawn towards spirituality:

Post his secondary schooling, the 14 year old Ramesha Tantri lost interest in it and reached Udupi in search of a spiritual Guru. The paryaya at the time was that of Pejavara Shrigalu. In those times, he came into contact with Shri Vidyamaanya Theertharu who was venerated for his knowledge and immersed himself in the spiritual word.  Shri Vidyamaanya Teertha was greatly pleased to see his interest in Vedanta and taught him grammar, Sumadhva Vijaya and texts such as Tatparya Nirnaya and hailed him. Thus, in the morning he studied at Sanskrit College and at noon took lesson in various scriptures from Shri Vidyamaanya Teertha. By 1974, he was awarded the honorary degree at the Sanskrit College of Udupi. Besides, he was actively involved in organizing as well as participating in cultural programs ay the Sanskrit College. Ramesha Tantri thus studied with allegiance through his childhood. In this way, in a span of about 7 – 8 years, his approach towards learning, the humility that such learning brought made him win the heart of several gurus and that of mentor Shri Vidyamaanya Teertha.

It is the standard to seek employment after education. That is to engage oneself in a field of interest. Having obtained an honorary scholarship, erudition in the scriptures, knowledge of tantra and the sacerdotal, Ramesha Tantri did not choose the fields of teaching & giving discourses or the family occupation of priesthood as career which would provide material assistance to his life. Just as a child chooses only his favorite object from a pile of objects, despite having several lustrous career opportunities before him, Ramesha Tantri chose to sever familial ties and incline towards the Lord. Taking up any of the above mentioned career options would cause him to remain in the material world therefore he decided to rid himself of familial attachments and expressed his desire to embrace sainthood in order to move closer to the Lord. Naturally, there was opposition to this decision of his initially although later with the consent of everyone on 10.06.1979 at Adamaru Matha of Adamaru village, Shri Vibudhesha Teertharu and Sri Vidyamanya Teertharu ordained him into sainthood, giving him the name Shri Vidyadeesha Teertha  and appointed as the successor of Shri Palimaru Matha.

After taking up the sainthood, Shri Shri Vidyadeesha Teertharu learnt the Sarvamoola Granthas, Shrimanyaayasudha and Vyasa Traya under Shri Shri Vidyamaanya Teertharu at the Adarsha (archetype) Gurukula at Adamaru. During the same period, while he conducted lessons and discourses for the students of the gurukula, alongside, he concluded the study of Shrimanyaayasudha under Shri Vidyamaanya Teertharu and the mangalotsava was conducted on 10.12.1984 at Adamaru. Engaged in service to his Guru, studying and teaching, in 1986 during the paryaya of Shri Vidyamaanya Teertha of Shri Palimaru Matha, he as Junior Seer was involved in the special worship of Shri Krishna and bedecked Krishna differently every day In front of Shri Krishna and the presence of his Guru, on 10.10.1988 he concluded the two year long discourse on Shrimanyaayasudha.

With several such achievements to his credit, he is a role model to all of us.  As a fine guru to society, a worshipper of Kodandapaani Shri Rama, currently, he is the 30th Peetadipathi of Shri Palimaru Matha.