Madhva Acharya (ಮಧ್ವಾಚಾರ್ಯರು)(Sanskrit pronunciation: [məd̪ʱʋɑːˈtʃɑːrjə]; CE 1238–1317), also known as Purna Prajña and Ananda Teertha, was a Hindu philosopher and the chief proponent of the Dvaita (dualism) school of Vedanta.[1][5] Madhva called his philosophy as "Tattvavada" meaning "the realist viewpoint".[5]

Madhvācārya was born on the west coast of Karnataka state in 13th-century India.[6] As a teenager, he became a Sanyasi (monk) joining Brahma-sampradaya guru Achyutapreksha, of the Ekadandi order.[1][3] Madhva studied the classics of Hindu philosophy, particularly the Principal Upanishads, the Bhagavad Gita and the Brahma Sutras (Prasthanatrayi).[1] He commented on these, and is credited with thirty seven works in Sanskrit.[7] His writing style was of extreme brevity and condensed expression. His greatest work is considered to be the Anuvyakhyana, a philosophical supplement to his bhasya on the Brahma Sutras composed with a poetic structure.[6] In some of his works, he proclaimed himself to be an avatar of Vayu, the son of god Vishnu.[8][9]

He was a critic of Adi Shankara's Advaita Vedanta and Ramanuja's Vishishtadvaita Vedanta teachings.[5][6] He toured India several times, visiting places such as Bengal, Varanasi, Dwarka, Goa and Kanyakumari, engaging in philosophical debates and visiting Hindu centres of learning.[7] Madhva established the Krishna Mutt at Udupi with a murti secured from Dwarka Gujarat in CE 1285.[6]

Madhvācārya's teachings are built on the premise that there is a fundamental difference between Atman (individual soul, self) and the Brahman (ultimate reality, God Vishnu), these are two different unchanging realities, with individual soul dependent on Brahman, never identical.[5] His school's theistic dualism teachings disagreed with the monist[10] teachings of the other two most influential schools of Vedanta based on Advaita's nondualism and Vishishtadvaita's qualified nondualism.[5][11] Liberation, asserted Madhva, is achievable only through the grace of God.[5][12] The Dvaita school founded by Madhva influenced Vaishnavism, the Bhakti movement in medieval India, and has been one of the three influential Vedānta philosophies, along with Advaita Vedanta and Vishishtadvaita Vedanta.[13][6][14] Madhva's historical influence in Hinduism, state Kulandran and Kraemer, has been salutary, but not extensive.[9] 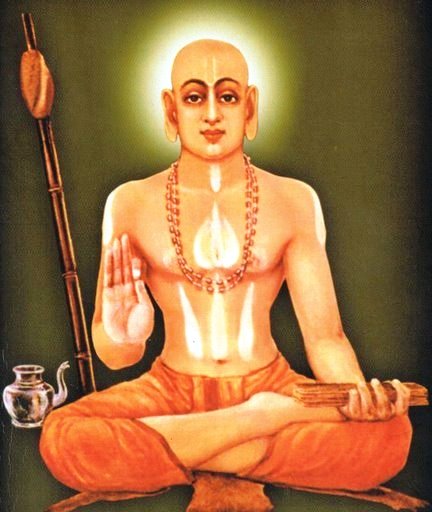