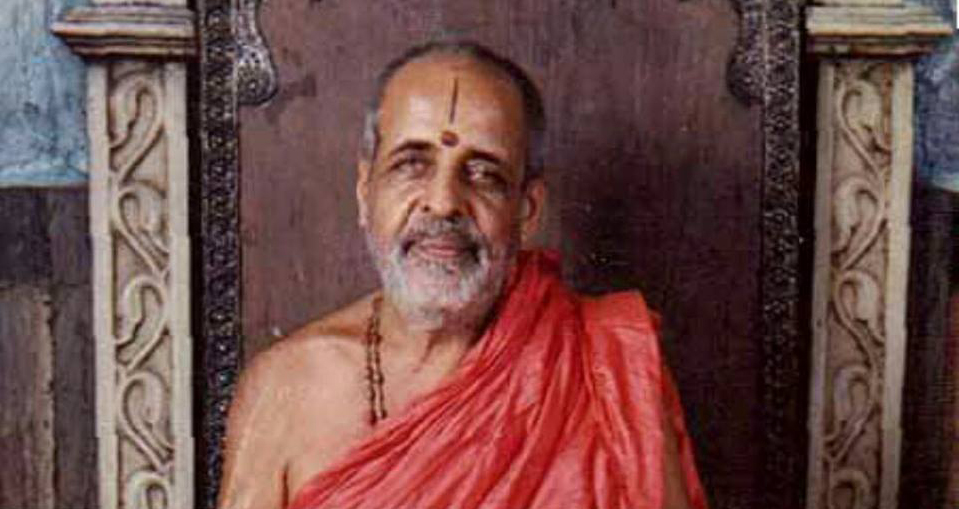 Shri Vidyamaanya Teertha was born on July 27th,1913 to a pious couple Shri Kuppanna Tantry and Smt.Radhamma at Ermaalu village of South Canara district in Karnataka.

His birth name was Narayana. Narayana received his initial education from his father who was held in high regard for his knowledge in dharma shastras and sampradaya. His upanayana was performed when he was 8 years old. He received mantropadesha from Shri Sudheendra Teertha. He went on to study at Shri M.S.P Mahapatashala which was run at the Ananteshwara Temple, Udupi during that period. At the age of 12, he was initiated into sainthood on November 5th, 1925 during Krodhana nama samvatsara by His Holiness Shri Vibuddhapriya Teertha of Adamaru Matha. Narayana was given the pranavopadesha and named Vidyamaanya Teertha. He was ordained as the 34th Pontiff of Shri Bhandarakeri Matha.

Shri Vidyamaanya Teertha’s thirst for knowledge was immense. He studied the preliminary Vedanta texts under Shri Vibuddhapriya Teertha for four years. Thereafter, under the tutelage of an eminent scholar Shri Inna Vasudevacharya he studied the Dashaprakarana, Dashopanishat and Tatvaprakaashika. He then went on to study the advanced texts of Vedanta such as Nyaya Sudha, Nyaayamrita, Tatparya Chandrika and Tarka Tandava under Shri Satyadhyana Teertha of Uttaradi Matha. After performing Shri Nyaya Sudha Mangala, Shri Satyadhyana Teertha is said to have addressed Shri Vidyamaanya Teertha and exclaimed “You have indeed become a jnaana bhandara (repository of knowledge)” owing to his erudition. Aged about 27 years, Shri Vidyamaanya Teertha thus completed his adhyayana.

Thereafter, for the remaining 60 years of his life, Shri Vidyamaanya Teertha went on to extensively propagate and create awareness about the tenets of Dvaita philosophy amongst a cross section of people across the country. His scholarly lectures on Vedanta in lucid language enabled him to connect with the common man. This won him thousands of devotees and the hitherto unknown Matha of Bhandarakeri became widely noted across states. During the course of his life, he went on to win several debates against the stalwarts of Advaita and Vishistadvaita and establish the Madhva siddhanta.

Shri Vidyamaanya Teertha has contributed enormously to the students of Madhva philosophy. The most notable amongst them is the establishment of Shri Madhva Raddhanta Samvardhaka Sabha in the year 1944 through which he invigorated innumerable students and scholars to study and propagate Dvaita Vedanta. The generous honorarium he awarded inspired them to attend the Sabha regularly and earn his appreciation by showcasing their erudition in Dvaita Vedanta. The establishment organized lectures, conducted debates and was instrumental in bringing out a publication called Dasha Prakarana that contained rare commentaries hitherto unpublished, as well as Sarvamoola with Hrishikesha Teertha Paata.

Another significant contribution of Shri Vidyamaanya Teertha has been his teaching and moulding of several Peetaadhipatis of impeccable rectitude and profound scholarship in Dvaita Vedanta. The foremost of his students is the revered present Peetaadhipati of Shri Pejavara Matha, Shri Vishwesha Teertha. He trained him rigorously from a tender age and shaped him into the great Dvaita philosopher and saintly person we see today. It was Shri Vidyamaanya Teertha who advised Shri Vishwesha Teertha to institute a Vidyapeeta to foster competent scholars in Dvaita Vedanta and allied shastras to preserve and promulgate the tradition for generations to come. Heeding the words of his guru, Poornaprajna Vidyapeeta saw the day of light in the year 1956.

Shri Krishna and Acharya Madhwa seemed pleased with the services rendered by Shri Vidyamaanya Theertha. He was anointed as the Pontiff of Shri Palimaru Matha (One of the Ashta Mathas) on February 3rd, 1969 and thus became the only seer to head two mathas simultaneously and to have worshipped Shri Krishna at Udupi.

In the year 1973, Shri Vidyamaanya Teertha made a pivotal decision to cancel all his tours and stay put at Adamaru village near Udupi. This decision was made in order to impart education in Dvaita Vedanta and allied shastras to four young sanyasins who were initiated into sanyasa to adorn the Peetas of four Mathas. For the next 10 years Shri Vidyamaanya Teertha taught and sculpted the four of them into excellent scholars and strong pillars of Dvaita siddhanta. These four gems are Shri Vishwapriya Teertha of Adamaru Matha, Shri Vidyadeesha Teetha of Palimaru Matha, Shri Sugunendra Teertha of Puttige Matha and Shri Vidyesha Teertha of Bhandarakeri Matha.

Shri Vidyamaanya Teertha has performed two paryayas at Shri Krishna Matha. During those paryayas, he has offered a gold cradle, a gold chariot and a diamond crown to Lord Krishna with the cooperation of his devotees.

Known as the Seer of the Century, the 88 year old Shri Vidyamaanya Teertha attained haripada on Suddha Ekadashi of Vaishakha Masa (May 14th, 2000). He was a great soul who will continue to be remembered for his saintly qualities, devout disposition, vast knowledge of the shastras and invaluable contribution to the preservation and propagation of Madhva philosophy.