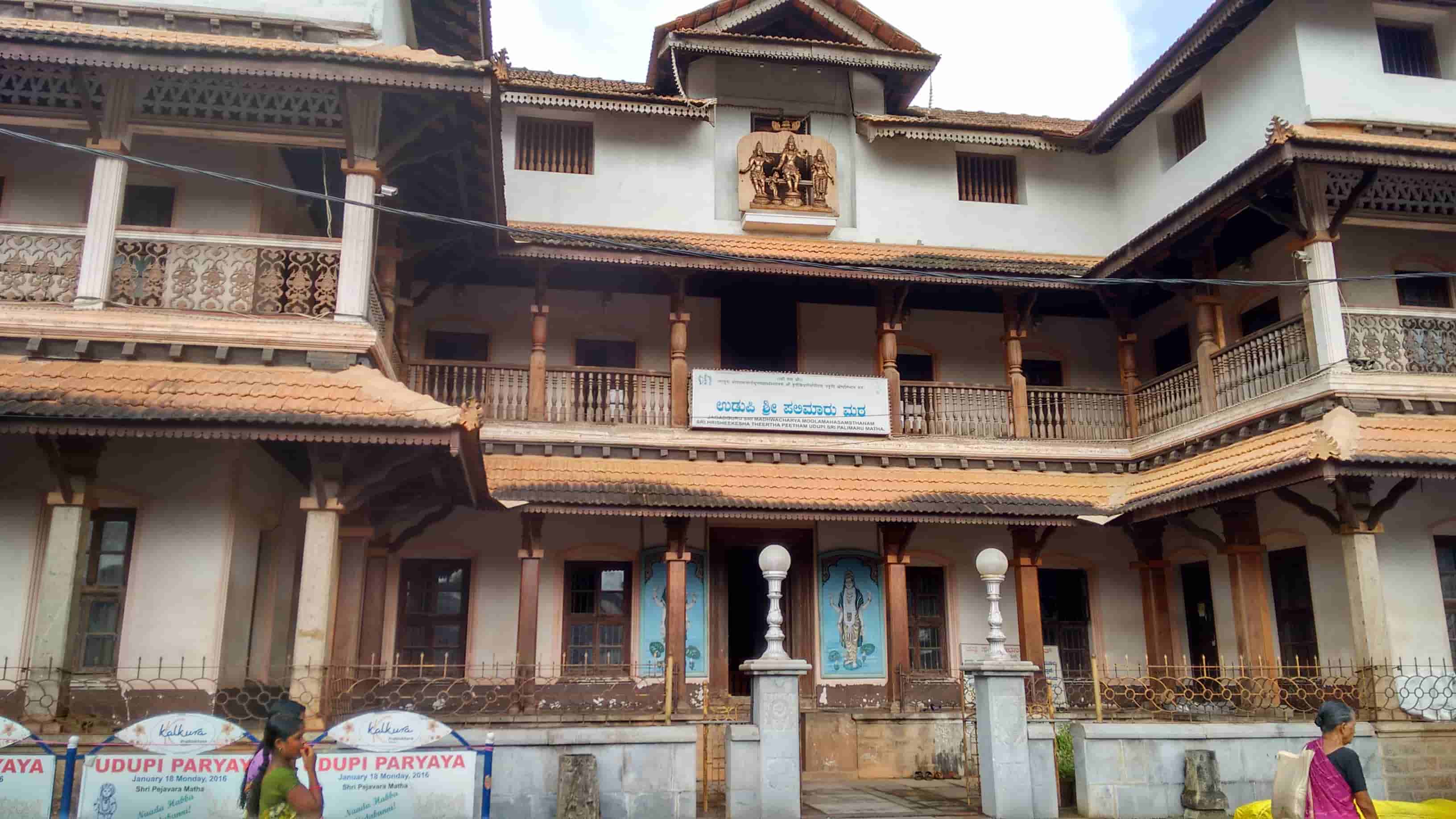 Madhvacharya ordained eight of his ascetic disciples to perform Shri Krishna Pooja and promulgate the Tatvavada philosophy. The renowned Ashta Mathas (Eight Mathas) of the land of Tulu were instated through these eight saints. These are the renowned Ashta mathas.

The main centres of these mathas are located in different villages of Tulunaadu. The practice of calling the matha by the name of the village in which it is situated has been in practice since ancient times. These eight mathas avail the opportunity to worship Shri Krishna in the following order:

While the pooja rotation took place at an interval of two months during the period of Acharya Madhva, it was extended to two years by Shri Vadiraja Teertharu. In short, this system is referred to as Paryaya. (For more details refer to the Shri Krishna Pooja Paryaya page)

Shri Hrishikesha Teertharu was the first to be initiated into sainthood by Shri Acharya. Shri Madhva’s immense love and trust in him has been described by the author of Madhva Vijaya. As he sang the Bhagavata etcetera in his mellifluous voice, Shri Madhva would deliver the exposition for the same. He was a fine writer too. He has scripted the Sarvamoola granthas of Shri Madhvacharya and made them available to the future generations. The original manuscripts are preserved at Shri Matha to date. His book ‘Anu madhva charite’ illustrates the life of Shri Madhvacharya. Another work titled ‘Sampradaya paddati’, despite being a small composition, stands firm as a significant milestone in understanding the tradition and customs propounded by Madhva.

Acharya Madhva has given different idols to these eight mathas for daily worship. He has offered idols of Sita, Hanuman and Lakshmana along with Lord Kodandapaani Shriramachandra to Palimaru Matha. This idol of Lord Ramachandra is offered special worship on three auspicious days in a year as mentioned below :

The moola matha of Shri Hrishikesha Teertha Peeta is located at Palimaru village. Thus, this lineage has come to be known as Palimaru Matha. This village is at a distance of about 40 kilometers from Udupi. It comes under the Padubidri Taluk.

Shri Palimaru Matha is constructed in a tranquil environment close to the banks of the Shambhavi river that flows along the outer fringe of the village. This ancient matha has enshrined Lord Vedavyasa in the inner sanctum and daily worship is conducted. At the rear side of the Matha is a shrine dedicated to Lord Mukhyaprana in a standing posture. To the people residing in the vicinity, this Mukhyaprana is whom they repose faith in to fulfil their aspirations.  Behind the shrine of Pranadevaru are the vrindavanas of the saints of the yore. (For more information, refer to the Guru Parampare  page)

As per the divine path paved by Sri Acharya Madhva, Palimaru Matha has always emphasized on knowledge. Since ancient times, alongside ritualistic worship, the seers have imparted lessons in Veda and Vedanta to their disciples. Even when the seer is touring, this is a daily responsibility. Giving this duty the form an institution, Palimaru Matha runs a vidyapeeta by the name Shri Yoga Deepika. At this Vidyapeeta, around 100 students are being imparted lessons in Veda-Vedanta and Pourohitya. This is a non-residential institution.

The current Peetadhipati of Shri Matha – His Holiness Shri Vidyadheesha Teertha is the 29th seer in the lineage. Having received the absolute grace of his guru His Holiness Shri Vidyamaanya Theertha, he has been ably leading the Shri Matha. Unrelenting propagation of Tatvavada, daily lectures on Nyaaya Sudha, uninterrupted sacramental tours throughout the country, observances ordained by the scriptures – he is adept in them.

Renowned as the seer of the century - Shri Shri Vidyamaanya Teertha of Shri Matha instituted a distinct organization Tatva Samshodhana Samsat for extensive research and publications on Vedanta and Shaastras. This organization has been progressing successfully under the leadership and guidance of His Holiness Shri Vidyadeesha Teertha.  (Click here to know about Tattwa Samshodhana Samsat)