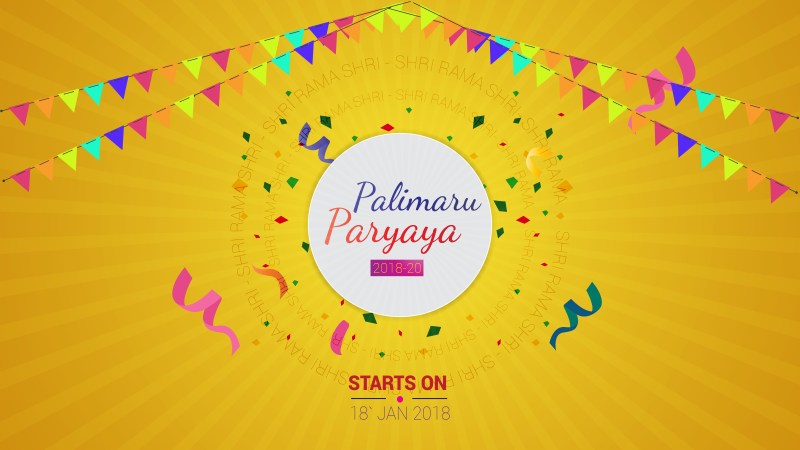 It is a known fact to everyone that with the intent of ensuring uninterrupted worship to the Shri Krishna idol installed by Shri Madhvacharya at Udupi, he designated eight junior ascetics.

He arranged for each of these eight ascetics to get an opportunity for this worship on a rotational basis once in two months. While one of them engaged in offering worship, the other seven ascetics were required to travel to other regions propagating the Tatvavada philosophy. The opportunity of worship thus obtained was referred to as “Shri Krishna Pooja Paryaya” by our elders. This system has popularly come to be known as Paryaya.

Over the course of time, this tenure of two months was extended to a period of two years. This change was effected by Shri Vadiraja Teertha.

Shri Krishna Matha is renowned for its rich traditions. It is known world over that the worship, festivities, offering of food, cultural programs, etc at Krishna Matha are all conducted with adherence to a distinct traditional framework. Among several such traditions, the most glorious is the Shri Krishna Pooja Paryaya celebration mentioned above.

The celebration of the transfer of the opportunity to worship from one matha to another is not confined to just Krishna Matha but culminates as a city carnival. This elucidates the importance accorded to the Paryaya ceremony.

This transfer of opportunity is not restricted to the role of idol worship. It is a service that has several dimensions. All social, educational and cultural programs undertaken are accorded the status of worship. The responsibility stated by Shri Madhvacharya “It is our duty to care for people” is brought to fruition here every single day. This is an endeavor that calls for an enormous amount of resources. His Holiness shoulders this responsibility without an iota of dereliction to the traditions of Shri Matha with the cooperation of devotees from all walks of life.

Prior to the commencement of the paryaya, four auxiliary programs are effectuated. These are referred to as muhurta(s).

Thousands of banana leaves are required to serve food to devotees who visit to behold Shri Krishna. In order to obtain the right sized leaves for this purpose, the Matha must have hundreds of banana trees. Planting banana saplings at the appropriate time would yield leaves during the commencement of the paryaya. This has to be ongoing till the end of the paryaya. Thus, a year before the paryaya commences, the administration of the matha sources superior genus saplings which are planted during an auspicious hour amidst vedic chants. Thereafter, the banana plantation is developed in an orderly manner.

According to a modest estimate, the number of people who consume prasada at Krishna Matha on a daily basis (inclusive of the Chinnara Santarpana program) is about 30,000. On special occasions, this number would be larger. This requisitions several metric tonnes of rice annually. The matha garners this rice by pooling in its own resources as well as the cooperation of people from all strata of society. As stated above, during a chosen auspicious hour, the first pile of rice is gathered. This is referred to as akki muhurta.

At Krishna Matha, only wood is used as fuel. The wood that would be required during the paryaya is begun to be collected 6 months prior to the commencement of the paryaya. The time when the first pile of wood for the paryaya is gathered is called kattige muhurta. At a time on a day prescribed by the priest, prayers are offered to all the Gods and then the wooden pile is begun to be gathered and stacked in the north-eastern corner of Madhvasarovara. Instead of stacking randomly, this wood is beautifully arranged in the form of a chariot. All those who visit Udupi can view this structure in the corner of Madhvasarovara.

During the second year of the paryaya too ample rice would be required. The rice thus required is procured in the form of paddy instead of rice itself. Elders may have initiated this system in view of the change in weather during the monsoons.  Besides, in Tulunaadu one phase of the paddy crop is harvested in the month of November – December. Those who were unable to make an offering of rice during akki muhurta, offer paddy during the bhatta muhurta. The onset of this collection is bhatta muhurta. This muhurta is conducted just few days prior to the beginning of the paryaya.

After all these preliminary preparations are done, the countdown to the paryaya begins.

Before commencing the paryaya, the seer who is going to ascend the paryaya peeta goes on a pilgrimage to all the sacred places across Bharata in a clockwise direction. Upon completion of the pilgrimage, the future paryaya peetadhipati enters the sacred land Udupi.  On that day, the residents of Udupi and the surrounding areas welcome the seer with a traditional and glorious procession into the city. In the days ensuing the pura pravesha, the horekaanike program begins.

In the region of Tulunaadu there is a beautiful tradition called horekaanike. All the people of society contribute as per their capacity towards these religious programs and horekaanike is indicative of the same. As stated above, rice and other provisions are gifted by the people to Shri Matha. This rice, as per the tradition of Tulunaadu is hoarded in large round containers made of paddy grass. This is called akki mudi. Interested devotees, local associations and organisations, people from surrounding villages bring akki mudi’s, pumpkins, vegetables and other commodities according to their capacity and offer them as gifts. This is horekaanike. Since these gifts are brought in by carrying them on the head and then offered, it is called horekaanike. It is also referred to as hasiruvaani.

On the first day of the paryaya, at about 2:00 a.m., the seers of the Ashta Mathas (except for the seer on the peetha) are brought in a procession to the Car Street. This procession begins at Jodukatte, a historic place in Udupi. The procession is extremely magnificent.  Hundreds of musical instruments, tableaus, stunning banners, assemblages of dancers, various entertaining folklore teams participate in this procession. Passing through a road called Tenkupete, the parade comes to the entrance of the Car Street. Thereafter, all the seers alight from their vehicles and walk up to the Kanaka Gopura of Shri Krishna Matha. Here, they first get a glimpse of Shri Krishna through the Kananakindi, submit prayers and offer donations for prosperity. Next they behold Chandramouleeshwara and the Lord of the region - Shri Ananteshwara, offer prayers and then enter Shri Krishna Matha.

Transfer of turn for paryaya worship

The seer who is to ascend the peeta offers prayers to all the Gods and arrives at the shrine of Shri Krishna. There, the seer currently on the peeta takes him to view Lord Shri Krishna and thereafter traditionally hands over the paryaya rights. This is a beautiful moment.

Shri Madhvacharya has given two distinctive physical assets to the Ashta Mathas.  The first is a small rice vessel and the second is a ladle to stir rice. This rice vessel is the illustrious Akshaya Paatre. 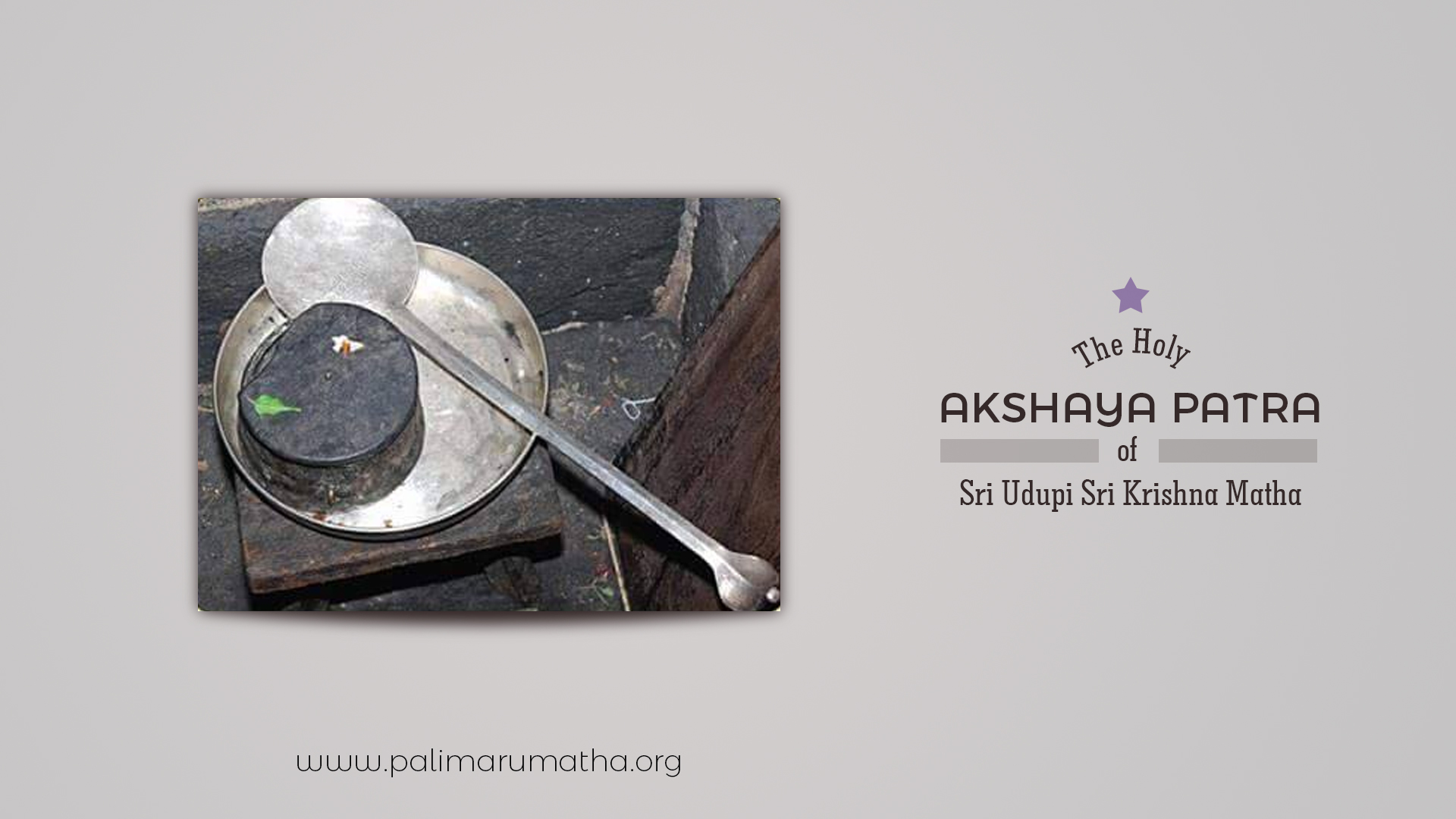 These two utensils have been preserved from the times of Shri Madhvacharya to date. They remain in the custody of the seer in the paryaya peeta. The outgoing seer handing over the Akshaya Paatre and ladle to the incoming seer is symbolic of the transfer of the paryaya rights.

Beside the sanctum sanctorum of Shri Krishna, there is a place where Shri Madhvacharya used to be seated.  A silver throne has now been made in the place where that magnificent stone lay used to be. The paryaya peetadhipati sits on this and directs the daily functioning of Shri Matha. This is called Sarvajna Simhaasana. Sitting here, the seer offers teertha, mantrakshate to all the visiting devotees and disciples.

After handing over the Akshaya Paatre, the outgoing seer brings the incoming seer to the Sarvajna Simhaasana and requests him to ascend it. This marks the close of the paryaya procedures.

A large building in the northern side of Shri Krishna Matha is the administrative office of the matha. This is called Badagumaalige. A podium is set up at this Badagumaalige on the day of the paryaya utsava. This dais is called Aralugaddige. After having ascended the seat, the incumbent paryaya seer brings the previous paryaya seer and all other seers to this gaddige and tends to them.

After this ritual, a formal conclave is held wherein all the seers and several dignitaries of the state are felicitated. Usually this program takes places for a period of 5 to 7 days.

Palimaru Matha receives the first opportunity in the system of paryaya rotation. Under the 2 year paryaya system devised by Shri Vadirajaru, 31 cycles have now been completed.  The first paryaya of the 32nd cycle will begin on January 18, 2018.